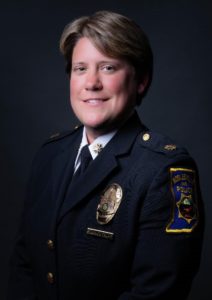 Throughout her career at the Noblesville Police Department, Deputy Chief Trump has held multiple positions within the agency. Positions included being a Field Training Officer (FTO) in the Patrol Division, a FTO supervisor, and a uniform patrol supervisor. As a lieutenant, Deputy Chief Trump worked in the Support Division as an operations lieutenant overseeing multiple specialty teams, and now serves as deputy chief of the Investigations Division and also oversees Internal Affairs.

Deputy Chief Trump was a member of the Emergency Services Unit on the agency where she served as an active negotiator for 12 years eventually becoming the assistant commander of the team. Deputy Chief Trump is an active shooter instructor and a certified Crime Prevention Through Environmental Design (CPTED) specialist.

Shannon attended Indiana University and holds a bachelor of arts in both history and criminal justice. She has a master of science in the administration of justice and security from the University of Phoenix.

Deputy Chief Trump is a graduate of the 254th Session of the FBI National Academy and remains an active member of the FBINAA. In addition to being a member of NAWLEE since 2011, Deputy Chief Trump is also a member of the Indiana Association of Chiefs of Police, the International Association of Chiefs of Police, and the National Organization of Black Law Enforcement Executives.